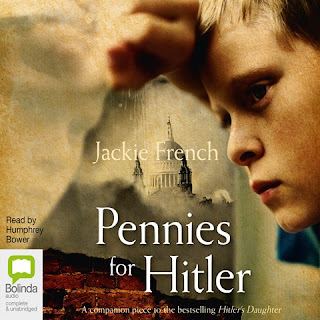 Pennies for Hitler by Jackie French. Read by Humphrey Bower. Published by Bolinda Audio. (Review of book downloaded through Audiobooksync a couple of years ago.)


Greetings from Washington DC TMS readers! Today is the fourth day of my conference and I am having so much fun learning and talking to publishers about new books coming in the next few months. I have packed an entire suitcase with books and arcs to read and share with you! Guess what Raina Telgemeier fans? I got Guts!!! Not just sampler either! Oh! And there's a new Babysitters Club spin-off called Babysitters Little Sister. The first book is called Karen's Witch. It's cute.

So! Our first Middle Grade Monday of the summer features Pennies for Hitler by Jackie French. Jackie French is an Australian author best known to me as the author of Diary of a Wombat. Pennies for Hitler is the story of a school boy named Georg, the only child of a university professor and his wife. His father is not only British, but Jewish, though the family does not practice. That doesn't matter to a group of students who, at graduation, decide to throw their fellow students and their professor out the window because they are Jews. Georg's mother manages to grab her son and escape. She thinks quickly and also manages to smuggle him out of the country to England to live with his aunt in London.

This unique story is quite suspenseful and harrowing at times. I learned about an aspect of the war I never knew! An extensive author note at the end is quite fascinating!

It might be also be a bit difficult to find. I found it on my phone while I was browsing my library of audiobooks to read. I had downloaded through the Audiobooksync summer reading program and never got to it. Do you know about Audiobooksync? You can download two audiobooks a week for free! No strings attached!

I will have to buy a paperback for the library and will also buy the audiobook because the narration is terrific. If you enjoy historical fiction set during World War II, you will love this book.
Posted by proseandkahn at 4:32 AM