"Stacking the Shelves" was a weekly meme hosted by Tynga's Reviews. It seems the blog is gone though, so I will just continue to post a "What's New? post whenever I receive new books. 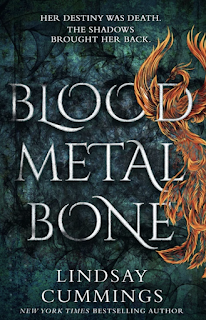 ONE EPIC QUEST FOR THE TRUTH

Wrongly accused of her brother’s murder, Sonara’s destiny was to die, sentenced to execution by her own mother. Punished and left for dead, the shadows have cursed her with a second life as a Shadowblood, cast out and hunted by society for her demon-like powers.

Now known as the Devil of the Deadlands, Sonara survives as a thief on the edge of society, fighting for survival on a quest to uncover what really happened to her brother and whether he is even dead at all…

What's in your mailbox this week?

Posted by proseandkahn at 10:51 AM No comments: 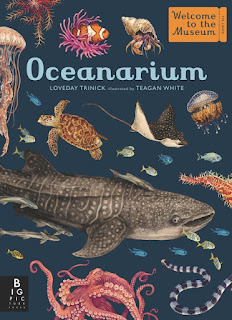 Image: Candlewick Press
Oceanarium: Welcome to the Museum by Loveday Trinick and illustrated by Teagan White. 112 p/ Big Picture Press/ Candlewick Press, April, 2022. 9781536223811. Review of finished copy courtesy of publisher.
Happy Friday! Fact Friday features Oceanarium: Welcome to the Museum by Loveday Trinick and illustrated by Teagan White. This entry in the oversized "Welcome to the Museum" series focuses on the wonder of water, specifically the ocean. The predominant feature of Earth as viewed from space is water. Though there are names for the various oceans, there really is only one ocean and it supports most life on Earth, even inland inhabitants.
Instead of chapters, the book is divided into galleries after a Preface and the Entrance, where readers are welcomed to a carefully curated, well-organized overview of ocean life from oceanic zones, depicted on a beautiful double-page spread in the Entrance, through plankton, mollusks, fish, mammals, birds and more.
As with other books in this fascinating series, the recto pages feature intriguing specimen illustrations. The verso pages give an overview and a key to the plate with scientific names, measurements and interesting facts. It's a great book for aspiring oceanographers or environmental stewards to browse and appreciate the oceans we all so depend upon.
Posted by proseandkahn at 11:34 AM No comments:

#tbt: Between Shades of Gray by Ruta Sepetys 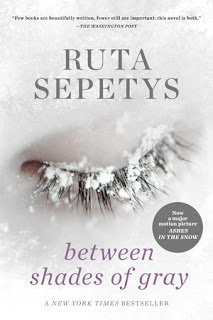 It's a dreary, rainy Thursday here in northern NJ and my dogs are not happy. And, hot weather is on its way. Ugh.  #tbt features Between Shades of Gray by Ruta Sepetys. The night that fifteen-year-old Lina's father failed to return home, Soviet forces invaded her home and forced the family to a truck. They were then loaded onto crowded cattle cars and transported thousands of miles from Lithuainia to Siberia, where they were imprisoned in harsh labor camps.

This is not an easy book to read. Lina's story is based on extensive interviews and research the author conducted while visiting family in Lithuainia. Most were still afraid to speak of the time more than fifty years after being freed. Between Shades of Gray was Ms. Sepetys' debut novel. It was published in March of 2011 and was named a New York Times Notable book, was a Carnegie Medal Finalist as well as a Morris Award Finalist and won the Golden Kite Award. It has been translated into more than thirty languages and was adapted for film and renamed Ashes in the Snow. Last fall, a graphic novel adaptation was published.

Posted by proseandkahn at 6:26 AM No comments: 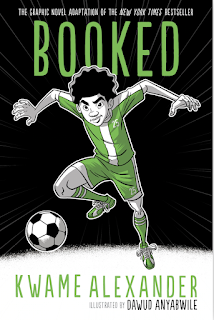 Here's the publisher's synopsis: Twelve-year-old Nick learns the power of words as he wrestles with problems at home, stands up to a bully, and tries to impress the girl of his dreams. Helping him along are his best friend and sometimes teammate Coby, and The Mac, a rapping librarian who gives Nick inspiring books to read.

This electric and heartfelt novel-in-verse bends and breaks as it captures all the thrills and setbacks, action and emotion of a World Cup match.

"A novel about a soccer-obsessed tween boy written entirely in verse? In a word, yes. Kwame Alexander has the magic to pull off this unlikely feat, both as a poet and as a storyteller. " —The Chicago Tribune

Can’t nobody stop you

Can’t nobody cop you…

Teen Tuesday and Audiook Review: I Must Betray You by Ruta Sepetys 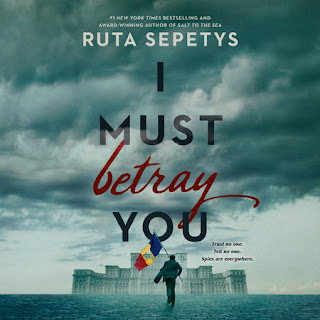 Image: Penguin Random House
I Must Betray You by Ruta Sepetys. Unabridged e-audiobook, ~7 hours, 10 minutes. Read by Edoardo Ballerini. Listening Library/ Penguin Random House, February, 2022. 9780593502280. (Review of downloadable e-audio borrowed from public library.)
Teen Tuesday features I Must Betray You by Ruta Sepetys. The year is 1989. Romania is governed by a cruel dictator, Nicholae Ceausescu and Romanians are starving while he lives in luxury. His secret service, the Securitate, are everywhere, encouraging neighbor to turn in neighbor for the most minor of infractions. Seventeen-year-old would-be poet, Christian Fortescu lives in a tiny apartment with his parents, older sister and ailing but spunky grandfather, Bunu. Christian is rounded up by the Securitate and the agent blackmails him into becoming an informant. They've learned he has an American dollar, given to him by the son of a diplomat. This is a punishable offense, but if he agrees to spy on the diplomat, he will not be prosecuted. The agent even promises medicine for Bunu.
Who was the informant? It could be anyone, including his best friend, Luca. Or, could it be his crush, Liliana? Terse intelligence reports are interspersed between the short, tense chapters in first-person, which increases the already high suspense.
Ms. Sepetys paints a vivid, bleak and scary picture of life under a repressive dictator who managed to keep his citizens in the dark about life outside Romania while communism fell. She narrated the plentiful back matter. Edoardo Ballerini deftly conveys Christian's growing paranoia and fear. Additionally, his fluent pronunciation of names was quite helpful.
Fans of the author or complex, well-researched historical fiction will love this.
Posted by proseandkahn at 11:00 PM No comments:

Middle Grade Monday: Besties: Work It Out by Kayla Miller and Jeffrey Casino 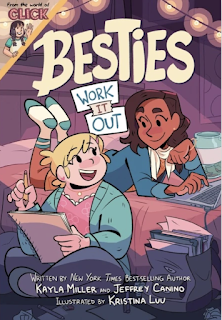 This spin-off of Ms. Miller's wildly popular Click series features bffs, Chanda and Beth. They want to earn some extra cash, Beth, so she can buy her mom a nice birthday gift and Chanda wants a cat. Their lemonade stand is a total bust and they are bummed. When Beth's older sister has to turn down a petsitting gig because she's too busy with sports and school, she offers the job to Beth and Chanda. They can't believe their luck. Not only is Ms. Langford's dog adorable, but she lives in a fancy house and owns closets full of fancy clothes, which the girls take turns trying on, taking photos and posting them to social media. Hm, not the wisest decision. This leads to their school mates (there are cameos of characters from the Click series) wanting to come over, which leads to an antique lamp getting broken, which leads to the girls needing more jobs to earn quick cash to pay for the lamp, which leads to... lots of friendship drama.

This was fun, if a bit over-the-top. Ms. Langford's blasé attitude about the girls' transgressions strained credulity. There really were no consequences for a huge invasion of privacy. The portrayal of Chanda's parents and family dynamics skewed a bit toward stereotyping. Tween readers won't notice.

Fact Friday: Inside In: X-Rays of Nature's Hidden World by Jan Paul Schutten 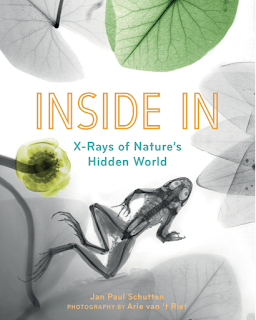 Fact Friday features Inside In: X-Rays of Nature's Hidden World by Jan Paul Schutten and photographed by Arie van 't Riet. Mr. van 't Riet is a medical physicist and teacher of the subject in Amsterdam. He was able to obtain an x-ray machine and began x-raying dead animals and insects. He chose dead animals for two main reasons, the most important being that prolonged exposure to x-rays is dangerous. The second reason being that, in order to obtain a clear x-ray, the subject must remain very still.

The author explains the science behind x-rays, then divides the book into animal classes starting with arthropods and mollusks and ending with mammals. Each x-ray photograph, most filling a single page, is accompanied by a page of text with information about the animal. X-rays are typically black and white, but any plant life that was arranged with the animal are tinged with color, making for a visually arresting image.

The text, while conversational veers toward wordy. The images are the stars here. This book would not necessarily be useful in research, but would be wonderful for browsing and instilling wonder at the natural world.