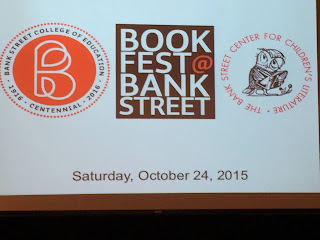 First off, I must state for the record that this event is one of the highlights of my year - a definite save-the-date event. I would miss my child's wedding for this event. Well, not really. But almost. I did miss it the year of Superstorm Sandy but not because of Superstorm Sandy but because I was presenting at a workshop where I got to watch Jerry Pinkney paint and he listened to how the ELL teacher and I use his book, Lion and Mouse as a model for a writing unit for ELL students. Yeah, worth missing Bookfest for that.

When Bookfest made the venue switch from NY Public Library to Bank Street College, I wasn't a fan. Even though its uptown location was geographically closer to me, its location made use of public transportation unfeasible. I had to drive. I had to park.

That first year, I did luck out and found a space on Riverside Drive but not since. After that first year, I almost didn't go back. We were packed into the auditorium like sardines and the lunch time was a mess. Kudos to the folks who ran it because they owned it and promised to do better the next year, so I returned. And it was better, though, I must say for all the money that auditorium must have cost, the seats are dang uncomfortable! But at least we weren't packed in like sardines and the lunchtime went much more smoothly.

For those of you who are unfamiliar, Bookfest is a day to celebrate children's literature. This year is the 44th year. Apparently, it started at Bank Street, or was it Columbia? I started attending shortly after starting my first school library job in the early to mid-2000s. It was held in this beautiful auditorium which I believe became unavailable to Bookfest due to its popularity as a wedding venue. Hence the move to Bank Street.

The day starts with coffee and danish and book browsing in the lobby. The Bank Street Book Store sets up tables with books by the authors who are appearing and I do try to avoid the table at all cost - one because I generally already own the books, and two, I just spend too much money on books!

Then there are two, this year, three panel discussions followed by an hour book discussion. When you register, you get to choose from a range of themed discussions ranging from picture books, easy readers and middle grade through YA. You need to give two choices. (Tip: register early) I usually have a hard time choosing the group I want to join. There are so many great groups! I generally stick with middle grade and YA. I chose to join Kiera Parrot's group, Square Pegs: fitting in, moving on and finding one's way in middle grade fiction. The books she chose to discuss were, George by Alex Gino; Fish in a Tree by Lynda Mullaly Hunt; The Nest by Kenneth Oppel, Blackbird Fly by Erin Estrada Kelly and The Thing about Jellyfish by Ali Benjamin.

Lunch is a delicious boxed lunch catered by 'WichCraft. This year, my sandwich was turkey, bacon, aioli, and avocado on a ciabatta roll, chips and a delectable cookie.

The afternoon features an additional panel discussion and keynote address. Authors are available at lunch at the end to autograph books. Oh, and there's a goodie bag filled with arcs, books, study guides, bookmarks and the like courtesy of the participating publishers.

Here are some photos from the day. I've some grading yet to do so I have to end here without describing the panels and keynote. It was a great day. It's usually a Saturday late in October. It's a good idea to subscribe to the blog to receive notification about the event. Register early as it usually fills quickly. 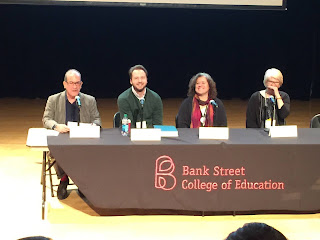 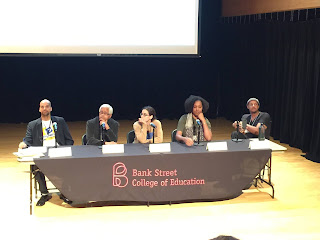 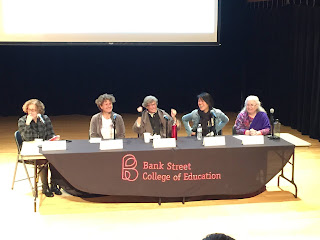 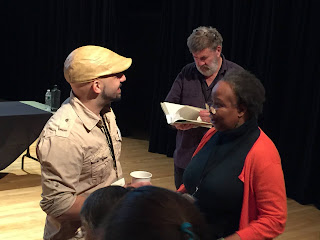 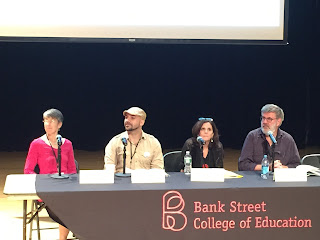 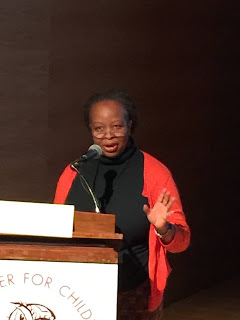 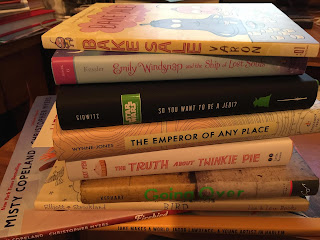 The books I purchased and got autographed. 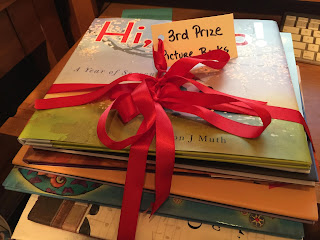 The books I won in the raffle! Yay! They will be sent to Never Counted Out as soon as I read and review them.

I am resisting the temptation to continue writing. As I posted the pictures, I started remembering all that was said; but it's 11:20. Those assignments are not grading themselves and the dogs need walking. And there's sleep to be had. Perhaps another post tomorrow?


Posted by proseandkahn at 8:20 PM

Email ThisBlogThis!Share to TwitterShare to FacebookShare to Pinterest
Labels: bookfest@bankstreet