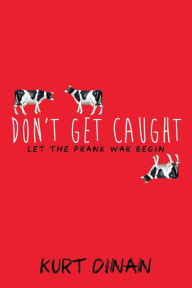 Publisher synopsis: 10:00 tonight at the water tower. Tell no one. -Chaos Club

When Max receives a mysterious invite from the untraceable, epic prank-pulling Chaos Club, he has to ask: why him? After all, he's Mr. 2.5 GPA, Mr. No Social Life. He's Just Max. And his favorite heist movies have taught him this situation calls for Rule #4: Be suspicious. But it's also his one shot to leave Just Max in the dust...

Yeah, not so much. Max and four fellow students-who also received invites-are standing on the newly defaced water tower when campus security "catches" them. Definitely a setup. And this time, Max has had enough. It's time for Rule #7: Always get payback.
Let the prank war begin.

Oceans 11 meets The Breakfast Club in this entertaining, fast-paced debut filled with pranks and cons that will keep readers on their toes, never sure who's pulling the strings or what's coming next.

First line: Rule #1 in any quality heist film is Don't get caught.

Page 56: My feet unstick from the floor, and I backpedal a few steps before turning and running for my life, the trophy tight in my hands. I zigzag around tables, with Goon's bull-like grunting close behind. I hear other footsteps too, and know that the rest of the lacrosse team is salivating a the chance to kill. kids leap up to watch the excitement, and I race for Potatoe's table.

It seems apropos that this prank/ heist book is being published on April Fool's Day. I recently attended a Sourcebooks preview webinar and, while I jotted down most of the titles to check out/ order, this one rose to the top. I guess all the mg prank/ heist novels I've read in the past year have had an influence. I requested an arc and received it. Thanks, Sourcebooks!
Posted by proseandkahn at 3:00 AM