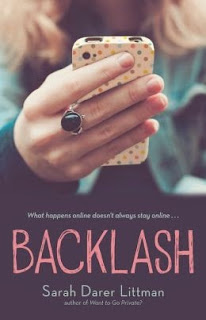 She thought that Christian liked her, that he was finally going to ask her to his school's homecoming dance. It's been a long time since Lara's felt this bad, this depressed. She's worked really hard since starting high school to be happy and make new friends.
Bree used to be BBFs with overweight, depressed Lara in middle school, but constantly listening to Lara's problems got to be too much. Bree's secretly glad that Christian's pointed out Lara's flaws to the world. Lara's not nearly as great as everyone thinks.

After weeks of talking online, Lara thought she knew Christian, so what's with this sudden change? And where does he get off saying horrible things on her wall? Even worse - are they true?

But no one realized just how far Christian's harsh comments would push Lara. Not even Bree.

As online life collides with real life, the truth starts to come together and the backlash is even more devastating than than anyone could have imagined.
First Line: The words on the screen don't make sense. They can't.

Page 56: (Liam)
People clap when I'm done. Yes!
Not only that, as I sit down, I notice I've wiped the smirk off Oliver's face. We may be friends, but we both like to win.
I guess I got that from Mom. You know how some parents let their kids win when they're little so they feel good about themselves? Not my mom. Dad would, but Mom was like, "If you want to win, you have to earn it. All this 'give everyone a trophy' garbage is ruining this country."
When I finally beat her at monopoly, I took a picture of the board, and then I never played her again.

Posted by proseandkahn at 5:12 AM