Waiting on Wednesday - A Hero's Guide to being an Outlaw

WoW is a weekly meme hosted by Breaking the Spine in which we share the titles of books we can't wait to release. 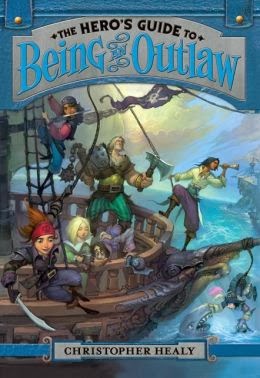 Publisher synopsis: The League of Princes returns in the hilariously epic conclusion to the hit series that began with Christopher Healy'sThe Hero's Guide to Saving Your Kingdom, which the Los Angeles Times called "one of the more clever, hilariously successful incarnations of the current literary rage to rip apart and rewrite fairy tales."

Prince Liam. Prince Frederic. Prince Duncan. Prince Gustav. You think you know those guys pretty well by now, don't you? Well, think again. Posters plastered across the thirteen kingdoms are saying that Briar Rose has been murdered—and the four Princes Charming are the prime suspects. Now they're on the run in a desperate attempt to clear their names. Along the way, however, they discover that Briar's murder is just one part of a nefarious plot to take control of all thirteen kingdoms—a plot that will lead to the doorstep of an eerily familiar fortress for a final showdown with an eerily familiar enemy.

I adored the first two books even though I didn't review them. They are so clever and laugh-out-loud funny. Being a fan of fracture fairy tales and/ or retellings, I was just tickled. I read the first book with my ears and the narration by Bronson Pinchot was just brilliant. Too bad sales didn't support a second audiobook.
Posted by proseandkahn at 3:35 AM