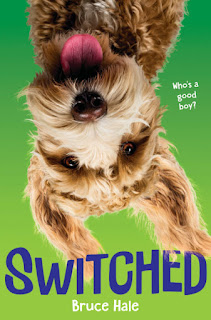 Middle Grade Monday features Switched by Bruce Hale. Twelve-year-old Parker Pitts can control very little in his life especially since his grandmother, Mimi died, so he cleans. Some might say, obsessively. He also goes to great lengths to avoid Deke, the school bully and won't even speak to Gabriella, his crush.

Now his half-sister, Billie is heading overseas to attend art school and leaving behind her golden doodle, Boof. Boof is an ill-mannered boor who leaves a trail of destruction everywhere he goes. It's bad enough that he ruined Billie's going away party, but then he gets his paws on the last gift Mimi had given Parker- a statue of the trickster, Eshu from Yoruba mythology. Parker refuses to let Boof get away with his precious gift from Mimi, gets into a tug-of-war with Boof and the two collide head first. No damage appears to be done. Until...

Parker awakens the next morning to find his sense of smell overwhelming and is panicked to find he can no longer see color! Boof awakens dismayed to find his sniffer doesn't work that great but thrilled to find he has hands and is able to get into that big box of food (the refrigerator).

This delightful switched-identity story switches point-of-view between Boof and Parker as each tries to adjust to his new reality. The hijinks that ensue are hilarious, but there's depth here as well. Boof as Parker approaches the mystery of middle school with doggie determination and openness and Parker as Boof learns to appreciate digging in the dirt and a good butt-sniff.

I know I will need multiple copies of Switched! Just like Boof, it definitely won't sit! Readers who adore books like Switched at Birthday by Natalie Standiford and The Swap by Erin Shull, will clamor for Switched as will readers who love a good dog book.

Posted by proseandkahn at 11:00 PM