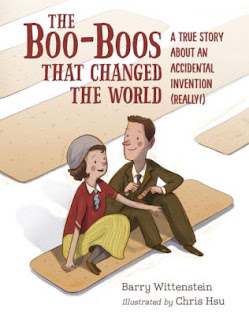 The Boo-Boos That Changed the World:  true story about an accidental invention (really!) by Barry Wittenstein. Illustrated by Chris Hsu. unpgd. Charlesbridge, February 13, 2018. 9781580897457.

Publisher synopsis: Did you know Band-Aids were invented by accident?! And that they weren't mass-produced until the Boy Scouts gave their seal of approval?

1920s cotton buyer Earle Dickson worked for Johnson & Johnson and had a klutzy wife who often cut herself. The son of a doctor, Earle set out to create an easier way for her to bandage her injuries. Band-Aids were born, but Earle's bosses at the pharmaceutical giant weren't convinced, and it wasn't until the Boy Scouts of America tested Earle's prototype that this ubiquitous household staple was made available to the public. Soon Band-Aids were selling like hotcakes, and the rest is boo-boo history. 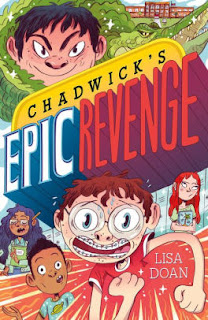 Publisher synopsis: The victim of endless pranks turns the tables on his nemesis—Chadwick Musselman decides it’s time to get revenge in this hilarious school story.

Chadwick Musselman has spent years being terrorized by Terry Vance, aka the Nile Crocodile. His luck changes when it appears that Terry has flunked the fifth grade—Chadwick will swagger into sixth grade as a ruler of the school without him. Sadly, Terry has no intention of ending his reign of terror, and Chadwick decides to turn the tables and finally get revenge!

In Chadwick and the Epic Revenge by Lisa Doan, a battle of wits, pranks, misunderstandings, and embarrassing moments abound in this quirky and uproarious novel. 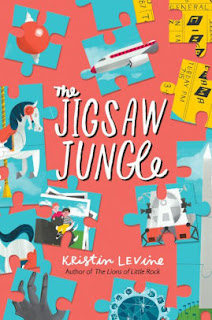 Publisher synopsis: Claudia Dalton's father has disappeared. What began as a late night at work has spiraled into a missing persons case-one that's left twelve-year-old Claudia questioning everything she's ever known about her father and their family.

But when she finally gets word from her dad, it turns out he isn't missing at all. He's just gone to "think things over" and visit an old friend, whatever that means. Feeling confused and hopeless, Claudia starts to assemble a scrapbook, gathering emails, receipts, phone transcripts and more, all in a desperate attempt to figure out what's happening with her dad. Claudia's investigation deepens at her grandfather's house, where she receives an envelope contains a puzzle piece and a cryptic message.

It is this curious first clue that sets Claudia on an unexpected treasure hunt that she hopes will bring her dad home and heal whatever; s gone wrong with her family. Told through the pages of Claudia's scrapbook, The Jigsaw Jungle is a moving story of a family lost and then found, with a dash of mystery and loads of heart.

That's what's new with me. What's new with you? Leave your link and I will definitely visit your blog and comment.
Posted by proseandkahn at 2:30 AM