When Trish, from Books, Bytes and Beyond sent an email in early September asking if I'd be interested in hosting Wendy Mass, I flew to my principal's office to ask; prepared to beg if the answer was anything but yes. He said to run the idea by the fifth and sixth grade LA teachers. All five teacher's eyes lit up when they heard, "Wendy Mass." No brainer. Each and every one of them have many Mass titles in their classroom libraries. I have quite a few in mine and they circulate briskly.

I have a sixth grade book club that meets at lunch. We had met to discuss our first book of this school year shortly after the phone call from Trish. While I usually let the kids pick their own next selection, I told them about the visit. After the happy dances and squeals died down, I suggested that our next book be The Candymakers. Agreement was unanimous. We usually meet on Thursdays and Thursday was the day of our visit with Ms. Mass. This club was the brainchild of two friends, who, as fifth graders approached their teacher with the idea. She asked if I could help them and I was happy to. Unlike other years that I tried running book clubs, these girls are just organizational wunderkinds. All I have to do is show up and guide discussion. A large bunch of enthusiastic readers show up. It is so much fun.

Anyway, the girls made a game, for our book club meeting, which was supposed to be the day of Mass' visit. They dropped it off on Tuesday. I should've take a photograph of it because they returned on Wednesday asking if they could take it home to "make sure it works." I said sure and was about to say, "Don't forget to bring it back!" But decided not to.

I should have. They forgot. Thursday morning, they asked if I could postpone our meeting to next week. The bright side? They said the kids could play the game and discuss the author visit along with the book.

They had a point.

The visit was great! Wendy had a Prezi where she spoke about the 20 books she published since her debut, A Mango-shaped Space, which won The Schneider Family Book Award. Her book, Jeremy Fink and the Meaning of Life was made into a movie so she shared the trailer. Prior to the acceptance of A Mango-shaped Space, she received rejections. She asked for three audience members to help her share the letters of rejection. See below. Impressive! 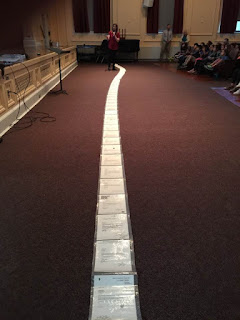 That is quite a visual. She also shared a technique she uses in which she "interviews" a main character. 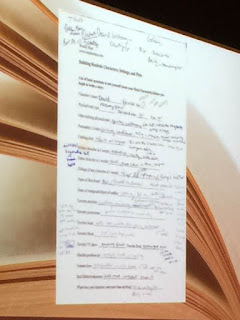 At one point she made the comment that no matter how many drafts she writes, she always finds something to change. I felt a bunch of my students turn to look at me. I told them that I was going to ask her if she felt her writing was ever done. I am teaching a new class this year to sixth graders. They are researching a topic of their choice with the end product being a segment in a class "news hour." Of course, I had two students "finish" pretty quickly. They rejected my suggestions that they add to their paper and so I gave them a variety of jobs in the class. I kept repeating the mantra that, "writing is never done." As we got to the point of practicing with the teleprompter, the two students suddenly realized that their segment was not long enough and went back to their resources.

The fifth and sixth grades listened respectfully to Wendy's presentation. Then, she opened it up for questions and I panicked when I realized that I forgot to go around to the classes to remind them about the Q & A. How they should really listen to the author and form questions on what they hear; that they should not ask questions like, "Where do you get your ideas?" or "How much do you make?"

Oops! Turns out, they had some really thoughtful and terrific questions! I think it was because many of the students read one or more of Wendy's books, loved them and were interested in finding out more. One student wanted to know if any of the rejection letters really stood out to her. She responded that one editor stated, "I don't even know what to do with this." They thought that was "harsh."

And that is what makes for a great author visit. That sweet spot of great presentation and an audience who is familiar with the author's work. Posted by proseandkahn at 6:27 PM