Waiting on Wednesday: The Tapper Twins Run for President by Geoff Rodkey 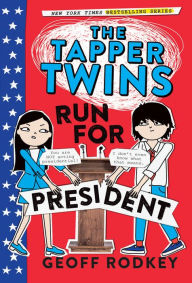 Publisher synopsis: Told as a series of interviews, smartphone photos, screenshots, text messages, and social media bursts, The Tapper Twins Run For President is guaranteed to be the absolutely funniest presidential race since 1776.

Claudia Tapper wants to become President of the United States someday, and her political career has begun in earnest at Culver Prep. She's the sixth grade class president, and has every reason to presume she'll get reelected. Reese Tapper could not care less about student government--until his soccer game is banned from Culvert's only outdoor space, and he learns becoming class president is his best shot at overturning the new rule. And thus, the greatest political rivalry in Culvert Prep history is born! In a tangle of evil-genius advisors, meddlesome best friends, negative campaign attacks and outrageously funny missteps, Claudia and Reese duke it out to see who will rule the school.

I love this series and so do my students. I reviewed the first two books for School Library Journal. This third, timely publication is sure to please.
Posted by proseandkahn at 2:30 AM