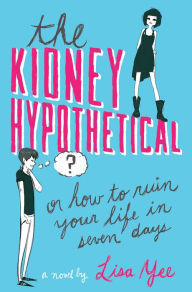 Higgs Boson Bing has seven days left before his perfect high school career is completed. Then it's on to Harvard to fulfill the fantasy portrait of success that he and his parents have cultivated for the past four years. Four years of academic achievement. Four years of debate championships. Two years of dating the most popular girl in school. It was, literally, everything his parents could have wanted. Everything they wanted for Higgs's older brother Jeffrey, in fact.
But something's not right. And when Higgs's girlfriend presents him with a seemingly innocent hypothetical question about whether or not he'd give her a kidney . . . the exposed fault lines reach straight down to the foundations of his life. . . .

First Line: It was supposed to be the best week of my life, but then everything went terribly wrong.

Page 56: For Sally Ride High School Helps Week, all the seniors were required to do community service. I created the Society for Animal Protection as a joke. Everyone loves animals. So what if SAP only had two members, me and Nick? We protected an animal.

I love Lisa Yee's books. She has a knack for making dead-on observations hilariously funny without being mean or snarky.

Posted by proseandkahn at 11:20 AM