WoW is a weekly meme hosted by Breaking the Spine in which we share the titles we are eagerly anticipating. This week, I'm featuring an audiobook WoW. I recently learned that a few books by one of my favorite authors are coming out in audio in the fall. 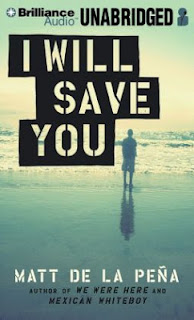 Publisher synopsis: Kidd is spending his summer at the beach. He'd do anything to get away from his group home and the dark memories there of his past.

He's working as a caretaker at the campsite, and he'd be blind if he didn't notice Olivia. Blond hair, blue eyes, rich dad. The prettiest girl in Cardiff. He might even have a chance with her, too. Until Devon appears.
Kidd's best friend followed him all the way to the beach. And he's not leaving until he teaches him a few lessons about life. And Olivia.

The hardcover has been sitting on the tbr pile since its publication. It is most decidedly for mature high school readers and that's mostly the reason why it keeps getting bumped by more middle school friendly titles in the queue. I often read titles for more mature audiences with my ears.

Up till now, none of his books have been available as audios. As of October, three of his titles will be available. The following two will be rereads for me. 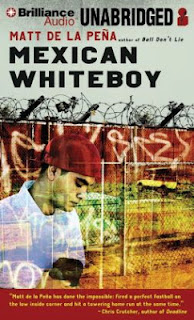 Publisher synopsis: Sixteen-year-old Danny searches for his identity amidst the confusion of being half-Mexican and half-white while spending a summer with his cousin and new friends on the baseball fields and back alleys of San Diego County, California. 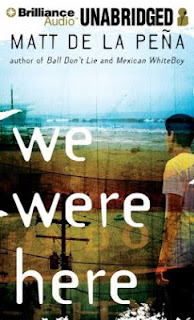 Publisher synopsis: The story of one boy and his journey to find himself.

When it happened, Miguel was sent to Juvi. The judge gave him a year in a group home — said he had to write in a journal so some counselor could try to figure out how he thinks. The judge had no idea that he actually did Miguel a favor. Ever since it happened, his mom can’t even look at him in the face. Any home besides his would be a better place to live.
But Miguel didn’t bet on meeting Rondell or Mong or on any of what happened after they broke out. He only thought about Mexico and getting to the border to where he could start over. Forget his mom. Forget his brother. Forget himself.
Life usually doesn’t work out how you think it will, though. And most of the time, running away is the quickest path right back to what you’re running from.

No narrator is listed just yet. The voice in each of these books is so distinct that I worry a bit about rereading them with my ears. Here are links to my 2009 reviews of We Were Here and Mexican White Boy.