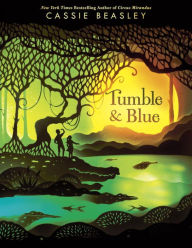 Publisher synopsis: When the red moon rises over the heart of the Okefenokee swamp, legend says that the mysterious golden gator Munch will grant good luck to the poor soul foolish enough to face him.

But in 1817, when TWO fools reach him at the same time, the night’s fate is split. With disastrous consequences for both . . . and their descendants. Half of the descendants have great fates, and the other half have terrible ones.

Now, Tumble Wilson and Blue Montgomery are determined to fix their ancestors’ mistakes and banish the bad luck that’s followed them around for all of their lives. They’re going to face Munch the gator themselves, and they’re going to reclaim their destinies.
But what if the legend of Munch is nothing but a legend, after all?

When I first read the synopsis, I thought of another book I enjoyed, A Snicker of Magic by Natalie Lloyd. Then, went on to read that Tumble & Blue would appeal to fans of...? You guessed it, A Snicker of Magic. <Pats self on back.>
Posted by proseandkahn at 3:01 AM