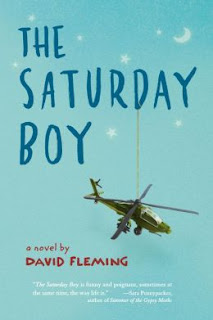 Publisher synopsis: If there's one thing I've learned from comic books, it's that everybody has a weakness—something that can totally ruin their day without fail.

For the wolfman it's a silver bullet.
For Superman it's Kryptonite.
For me it was a letter.
With one letter, my dad was sent back to Afghanistan to fly Apache helicopters for the U.S. army.
Now all I have are his letters. Ninety-one of them to be exact. I keep them in his old plastic lunchbox—the one with the cool black car on it that says Knight Rider underneath. Apart from my comic books, Dad's letters are the only things I read more than once. I know which ones to read when I'm down and need a pick-me-up. I know which ones will make me feel like I can conquer the world. I also know exactly where to go when I forget Mom's birthday. No matter what, each letter always says exactly what I need to hear. But what I want to hear the most is that my dad is coming home.

First line: It was a rainy and cold morning and the bus was late and so was Budgie.

Page 56: Mr. Putnam rolled the r the say Señora Cruz likes us to when we're doing Spanish. I couldn't do it right. Either I would roll the r enough or i'd roll it too much and end up spitting on someone by accident. Don't ask me how it happened but it did.

I found this today in one of my Junior Library Guild boxes so I brought it home with me. It intrigued, plus it's a debut.

Posted by proseandkahn at 4:45 PM