The Power of Ritual

Of the almost fifty books I have written for children, Zero Tolerance is the most timely. It is the only book I’ve written that was inspired by an actual news story: a few years ago a local middle school expelled an honor student for bringing an apple-cutting knife to school by mistake. Zero tolerance polices are in the news now on a regular basis, as proponents and detractors debate how best to keep schools and students safe.

So in writing Zero Tolerance I ended up with a book about a “hot” topic, the only time in my career I’ve ever done so. (Usually I write about small, timeless problems, like trying to talk your parents into letting you have a pet hamster, or trying to win a schoolwide reading contest). But I wrote the book, as I write all my books, in an extremely old-fashioned, habit-bound, and ritualistic way.

Decades into my writing career, I still write my books by hand. I write on a clipboard—a very old, dented clipboard that doesn’t even have its clip any more. If my house in Boulder, Colorado, was threatened  by a forest fire, this clipboard would be one of the first things I’d try to save. I’m not sure I could write a book without it.

I always use the same kind of paper: pads of narrow-ruled white paper (where I panic if the pads I order online have lines that are slightly too light or too dark). I always use the same kind of pen: a Pilot Razor-Point fine-tipped black marker pen. (More panic a few years ago when Office Depot and Office Max stopped carrying these pens in their stores, and great rejoicing when I discovered I could still get them through amazon.com). I write lying down, on a couch or in bed. I always drink the same beverage as I write: Swiss Miss hot chocolate. I always drink it in the same mug.

In her wonderful book The Creative Habit, choreographer Twyla Tharpe talks about the importance of “rituals of preparation.” Doing the same thing in the same way “habitualizes it” and makes it that much easier to do, and harder to skip. “First steps are hard,” Twyla writes. So “it’s vital to establish some rituals—automatic but decisive patterns of behavior—at the beginning of the creative process, when you are most at peril of turning back, chickening out, giving up, or going the wrong way.
”
As I wrote Zero Tolerance, I was in largely uncharted territory for myself, writing a book with subject matter that presented new challenges, unsure myself what would happen in the course of the story: Would Sierra be expelled or not? By the end of the book, would she even care? For the most part, I wrote blind, groping my way toward the finish, knowing how much I’d need to go back and revise when that first draft was done.

But at least I had the comfort of knowing that I’d be doing my groping on my well-worn clipboard, scribbling on a pad of narrow-ruled paper with a Pilot Razor Point pen, while drinking Swiss Miss hot chocolate in a flowered mug. And, as Twyla Tharpe tells us, that makes all the difference. 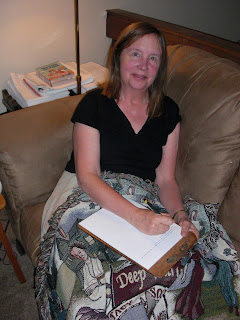 Posted by proseandkahn at 9:18 AM