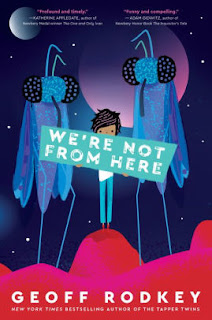 Publisher synopsis: Imagine being forced to move to a new planet where YOU are the alien! From the creator of the Tapper Twins, New York Times bestselling author Geoff Rodkey delivers a topical, sci-fi middle-grade novel that proves friendship and laughter can transcend even a galaxy of differences.

The first time I heard about Planet Choom, we'd been on Mars for almost a year. But life on the Mars station was grim, and since Earth was no longer an option (we may have blown it up), it was time to find a new home.

That's how we ended up on Choom with the Zhuri. They're very smart. They also look like giant mosquitos. But that's not why it's so hard to live here. There's a lot that the Zhuri don't like: singing (just ask my sister, Ila), comedy (one joke got me sent to the principal's office), or any kind of emotion. The biggest problem, though? The Zhuri don't like us. And if humankind is going to survive, it's up to my family to change their minds. No pressure.

I won this thanks to a giveaway by the author. I was so happy to even see the tweet and put the book on my order because I am a huge fan of his Tapper Twins books. I was lucky to review the first two for SLJ and have three in my library. Imagine my surprise when I looked up We're Not from Here to order and learned of a fourth Tapper Twins book! Who knew?

Purchased: Still have gift cards but still have a mountain of books on the tbr pile! Enough!