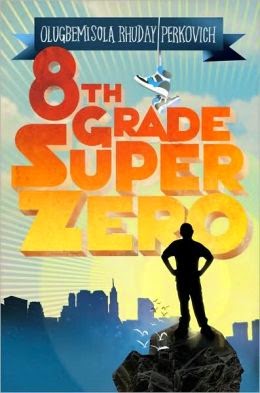 Publisher synopsis: In this terrific debut, a Brooklyn middle-schooler finds the superhero within himself thanks to old friends, new dreams, and a pair of magical "Dora the Explorer" sneakers.

Ever since a deeply unfortunate incident earlier this year, Reggie's been known as "Pukey" McKnight at his high-intensity Brooklyn middle school. He wants to turn his image around, but he has other things on his mind as well: his father, who's out of a job; his best friends, Ruthie and Joe C.; his former best friend Donovan, who's now become a jerk; and of course, the beautiful Mialonie. The elections for school president are coming up, but with his notorious nickname and "nothing" social status, Reggie wouldn't stand a chance, if he even had the courage to run.
First Line: "Hey, Pukey, got a pen?" Hector Vega jabs me in the back. He does this every day.

Page 56: "Are you scared?" he asks.
"Of what?"
"You know, the whole shelter thing," he says. "I mean, those homeless people. They're not...My dad wouldn't let me get near a place like that."
He says "a place like that" like it's another planet, full of living nightmares too horrible to describe. And "they're not..." what? Most of the homeless people that I see have skin closer to mine than his, and I wonder if he would talk about me the same way. I say, "A place like what? What are you talking about?"
"Forget it," he mutters, picking up a magazine.
Good. Because we need to leave this conversation alone.

I reorganized my double-stacked and burgeoning tbr bookshelves over spring break and found this. I have so many books on the tbr mountain that I will never read them even if I never bought another book (gasp!) and lived to be 100. This is a tragedy.