Waiting on Wednesday - The Black Reckoning by John Stephens

WoW is a weekly meme hosted by Breaking the Spine in which we share the titles of books we are eagerly anticipating. 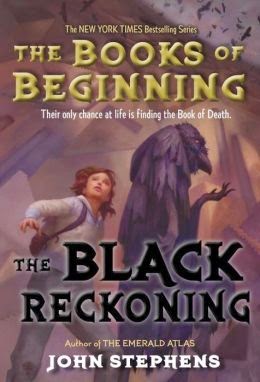 Publisher synopsis: The final book in the bestselling Books of Beginning trilogy that began with The Emerald Atlas, which the New York Times called “a new Narnia for the tween set.”

The adventures of siblings Kate, Michael, and Emma come to a stunning conclusion when they must find the last Book of Beginning—the Book of Death—before the Dire Magnus does, for when all three books are united, their combined power will be unstoppable.
Soon Emma is on a journey to places both worldly and otherworldly, confronting terrifying monsters and ghosts, and what is darkest within herself. As the fabric of time begins to fray, she becomes the final piece of an extraordinary puzzle. Only if she can master the powers of this most dangerous book will she, Kate, and Michael be able to save the world from the dramatic, deadly final confrontation between magical and ordinary people that the Dire Magnus has in store.

Hm,m. I echo much of the online sentiment, "finally!" This one's coming in more than 2 years after book 2. Now, I guess there's nothing that explicitly states that series must be released yearly, but that seems to be the general rule of thumb. It must be bittersweet to toil over a book for years only to have the thing read in six hours and hear, "Next!" I also understand that life sometimes gets in the way and schedules can't be kept. But the radio silence is a bit maddening. The trilogy fell off my radar until a student asked me about it. Frankly, I just lost track.
Posted by proseandkahn at 3:00 AM