WoW is a weekly meme hosted by Breaking the Spine in which we share titles we are eagerly awaiting. 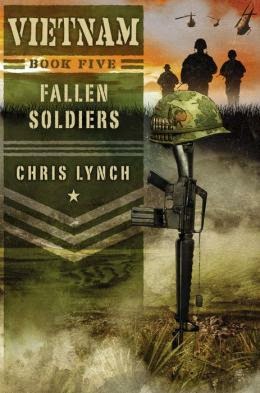 Publisher synopsis: Morris, Rudi, Ivan, and Beck were best friends. So when one of them was drafted into the Vietnam War, the others signed up, too. They promised to watch out for one another. They pledged to come home together.
Now, that pledge has been broken. One of the four has been killed in action. And the remaining three are the only men alive who know the awful truth about their friend's death.
Each is left to deal with their secret in his own way. One of them will accompany his friend's body home to Boston. One of them will defy orders in an act of protest. And one of them will decide it's up to him to single-handedly win the war.
In the end, Vietnam may claim more than their lives. As the war grinds on, their very souls are at stake. And their shattered friendship will prove either their salvation . . . or their ruin.

I am so emotionally invested in these boys. Here's a link to a double review of the first two. I guess I never got around to reviewing the second two. The series is quite popular at my middle school.

I looked the series up yesterday because I wanted to feature it in a Top Ten Tuesday post and discovered this new one. I'm so glad that I stumbled upon it because I've seen nothing about it yet. Honestly, we are all drowning in a sea of information!