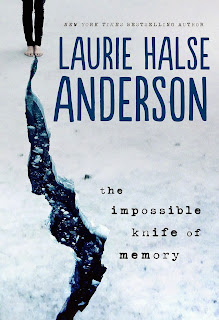 Publisher synopsis: For the past five years, Hayley Kincaid and her father, Andy, have been on the road, never staying long in one place as he struggles to escape the demons that have tortured him since his return from Iraq. Now they are back in the town where he grew up so Hayley can attend school. Perhaps, for the first time, Hayley can have a normal life, put aside her own painful memories, even have a relationship with Finn, the hot guy who obviously likes her but is hiding secrets of his own.

Will being back home help Andy’s PTSD, or will his terrible memories drag him to the edge of hell, and drugs push him over? The Impossible Knife of Memory is Laurie Halse Anderson at her finest: compelling, surprising, and impossible to put down.

First line: It started in detention.

Page 56: There was a circle of grime around the doorknob from Dad opening it when his hands were greasy. A shredded spiderweb strung from the top-right edge of the door frame to the shade of the overhead light in the middle of the hall. The house was looking more and more like a place that squatters lived in, instead of what it was: a home that had been in Dad's family for three generations.

I wasn't going to read the arc. A friend who teaches at a nearby school went to NCTE and got a signed one. He offered to loan it to me and I almost passed, but remembered that one of the eighth grade LA teachers asked if I had gotten the arc. So I asked if he'd mind if Jen read it first. He didn't, but begged that we take good care of his signed arc. Jen gave it back to me yesterday utterly raving about it. I was going to just pop it in the mail, but I cracked it open last night and I have a snow day today, so-o-o.

How much do you love the cover? I think it's stark and stunning.
Posted by proseandkahn at 6:21 AM