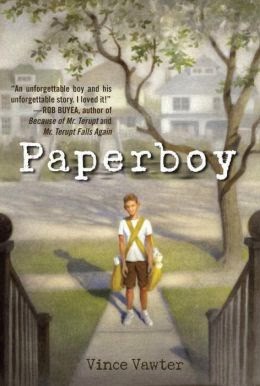 Synopsis: For fans of To Kill a Mockingbird, The King's Speech, and The Help. A boy who stutters comes-of-age in the segregated South, during the summer that changes his life.

An 11-year-old boy living in Memphis in 1959 throws the meanest fastball in town, but talking is a whole different ball game. He can barely say a word without stuttering, not even his own name. So when he takes over his best friend's paper route for the month of July, he knows he'll be forced to communicate with the different customers, including a housewife who drinks too much and a retired merchant marine who seems to know just about everything.
The paper route poses challenges, but it's a run-in with the neighborhood junkman, a bully and thief, that stirs up real trouble--and puts the boy's life, as well as that of his family's devoted housekeeper, in danger.

First Line: I'm typing about the stabbing for a good reason.

Page 56: I missed Rat every time I had to talk to somebody who didn't know me but it didn't do any good to think about Rat because I would miss him more.

Posted by proseandkahn at 6:15 AM