Non-Fiction Monday/ Blog Tour: For the Good of Mankind? The Shameful History of Human Medical Experimentation 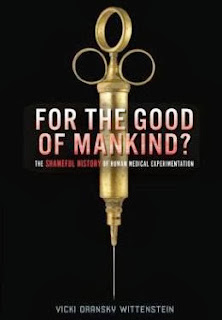 Human experimentation? On children? Author Wittenstein pulls no punches. In the introduction of this compelling, yet horrifying book, readers meet adorable Simeon Shaw, a four-year-old Australian lad stricken with bone cancer, with little hope for a cure. Enter the American Red Cross, doctors at a San Francisco hospital and the US Army, who air-lifted Simmy and his mum to the US for "treatment." Instead of being treated, Simmy was injected with radio-active material so that that doctors could track the absorption of the toxins. He was returned to Australia and died about nine months later.

This is one tough but important read. Ms Wittenstein delves into the surprisingly dodgie history of medicine, mostly in the United States going back to the 1700's to expose some horrific abuses of human guinea pigs, mostly the poor and powerless in society, slaves, prisoners, orphans and other voiceless individuals.

Despite the Hippocratic Oath, which dictates that doctors do no harm and despite the Nuremberg Code, which arose after the horrors of Nazi experimentation on Jews in concentration camps were exposed, abuses in the conduct of clinical trials exist to this very day. Indeed, the area of medical ethics continues to be hotly debated as newer issues arise, such as biospecimen research, stem cell research and other genetic research.

There are archival photographs, some dark and grainy, but all well-captioned. Text boxes weave in extra information, such as the Eugenics Movement, the Manhattan Project, and the Thalidomide tragedy. Detailed source notes on each chapter conclude the volume along with a selected bibliography, and lists of books, websites, films and interviews for further reading.

The book is a must-purchase for high school libraries and, would be appropriate for guided close-reading in the hands of an adept middle school language arts or social studies teacher. A section entitled, Critical Analysis: What do you think? provides intriguing questions for discussion. Additionally, check out the author's website (below)for more resources, including Common Core links.

I enjoyed the author's debut, Planet Hunters and look forward to reading more compelling, meticulously researched informational books from her in the future. 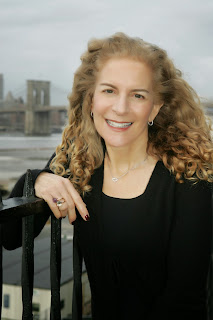 VICKI ORANSKY WITTENSTEIN has always been curious about new ideas, people, and places. That curiosity has taken her life in many different directions.  So far, she has been a student, a criminal prosecutor, a writer, and an advocate for children and families.  She is the author of a number of science and history articles for young readers, as well as the book Planet Hunter: Geoff Marcy and the Search for Other Earths, which won the 2013 Science Communication Award from the American Institute of Physics.  She lives with her family in Brooklyn, New York. For more information, and for a free discussion guide, visit http://vickiwittenstein.com/.

Non-Fiction Monday is hosted this week by Apple with Many Seeds.

Posted by proseandkahn at 2:36 AM