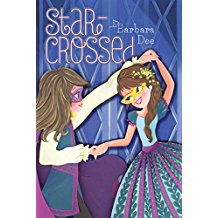 Publisher synopsis: Mattie is chosen to play Romeo opposite her crush in the eighth grade production of Shakespeare’s most beloved play in this Romeo and Juliet inspired novel from the author of Truth or Dare.


Mattie, a star student and passionate reader, is delighted when her English teacher announces the eighth grade will be staging Romeo and Juliet. And she is even more excited when, after a series of events, she finds herself playing Romeo, opposite Gemma Braithwaite’s Juliet. Gemma, the new girl at school, is brilliant, pretty, outgoing—and, if all that wasn’t enough: British.

As the cast prepares for opening night, Mattie finds herself growing increasingly attracted to Gemma and confused, since, just days before, she had found herself crushing on a boy named Elijah. Is it possible to have a crush on both boys AND girls? If that wasn’t enough to deal with, things backstage at the production are starting to rival any Shakespearean drama! In this sweet and funny look at the complicated nature of middle school romance, Mattie learns how to be the lead player in her own life.

First Line: It wasn't about me, I knew. But still.

Page 56: Anyway, thinking about the play was a good distraction as I spent the day avoiding Willow and all her many teammates. I also avoided Elijah as much as I could-which wasn't easy, because he was in most of my classes. As for Gemma, it was funny how completely she'd vanished into her circle of friends. Not that I thought she'd leave a note in my locker (Wanna sit together at lunch?)-but on the balcony, it almost seemed as if she wanted to get to know me, or at least to understand why we couldn't be friends.
Posted by proseandkahn at 3:03 AM