Waiting on Wednesday - The Worst Class Trip Ever by Dave Barry

WoW is a weekly meme hosted by Breaking the Spine in which we share the titles of books we are eagerly anticipating. 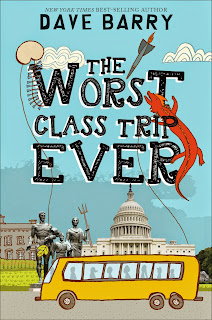 Publisher synopsis: In this hilarious novel, written in the voice of eighth-grader Wyatt Palmer, Dave Barry takes us on a class trip to Washington, DC. Wyatt, his best friend, Matt, and a few kids from Culver Middle School find themselves in a heap of trouble-not just with their teachers, who have long lost patience with them-but from several mysterious men they first meet on their flight to the nation's capital. In a fast-paced adventure with the monuments as a backdrop, the kids try to stay out of danger and out of the doghouse while trying to save the president from attack-or maybe not.

I learned of this from Betsy Bird a few weeks back. Click here to read a short interview. My day immediately brightened (despite the fact that it was before six in the morning and still dismally dark). I fondly recalled the time Dave Barry and Ridley Pearson visited my school while on tour for Science Fair about six or seven years ago. 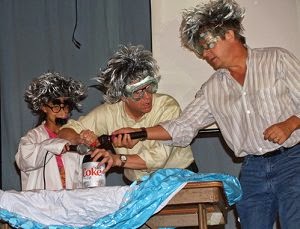 What are you waiting on? Leave a link in the comments.
Posted by proseandkahn at 3:00 AM