Princess Labelmaker to the Rescue by Tom Angleberger 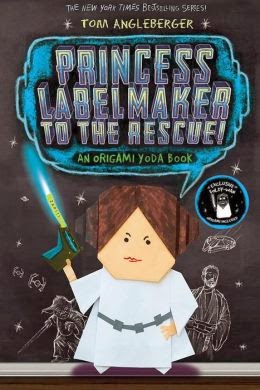 This hilarious, yet deep series continues to surprise and delight. Even though the initial stories can kind of stand alone,* this book continues the story started in book 4, The Surprise Attack of Jabba the Puppett. The Rebel Alliance took on the principal, school board and Fun-Time, a state test prep company and learned of a surprise ally in their quest. Principal Rabbski left the students under the impression that something would be done about all the boring test prep at the end.

Now, it's several weeks later and Tommy and the gang are still stuck with Fun-Time and each time they approach the principal, she puts them off. The rebel forces are trying to stay strong, but they are losing support. Even Tommy admits that it's scary trying to attempt to sabotage test results by not doing his best.

It seems that someone has stolen the case files and has given them to the principal. Has someone gone over to the Dark Side? The subversive fun continues as everyone weighs in on the goings on at McQuarrie Middle School.

This is a great series to give to any reader, but kids looking for funny or Wimpy Kid read alikes will find much to laugh about here.

*I recommend starting at the beginning. Really.
Posted by proseandkahn at 7:44 AM