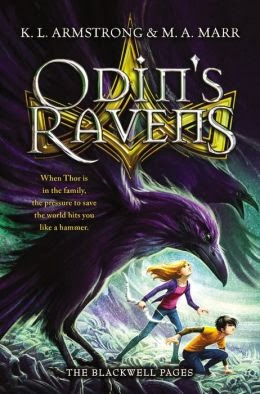 Publisher synopsis: Seven kids, Thor's hammer, and a whole lot of Valkyries are the only things standing against the end of the world.

When thirteen-year-old Matt Thorsen, a modern day descendant of the Norse god Thor, was chosen to represent Thor in an epic battle to prevent the apocalypse he thought he knew how things would play out. Gather the descendants standing in for gods like Loki and Odin, defeat a giant serpent, and save the world. No problem, right?
But the descendants' journey grinds to a halt when their friend and descendant Baldwin is poisoned and killed and Matt, Fen, and Laurie must travel to the Underworld in the hopes of saving him. But that's only their first stop on their journey to reunite the challengers, find Thor's hammer, and stop the apocalypse--a journey filled with enough tooth-and-nail battles and larger-than-life monsters to make Matt a legend in his own right.

First line: If there was one thing worse than seeing a giant's head rise from the ground, it was seeing two giant heads.

Page 56: Two other warriors stood, one on each side of him, blocking the gap between the burial mounds. All three looked-well, they looked dead. There was no other way to describe it. Their clothing was tattered, their faces gray and drooping, like they were one good beard-tug from sliding off.

I really enjoyed book one of this series, Loki's Wolves, as do many of my students. As a matter of fact, I was delayed in starting this because one of those students spied it on my desk a few weeks ago and begged me to read it. When her classmates saw it, they begged me to be next. So-o-o...
Posted by proseandkahn at 5:43 AM