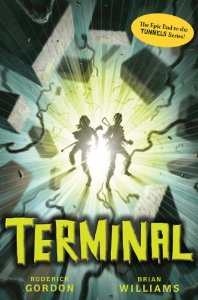 Publisher synopsis: Total Termination of the English: The Styx and their lethal cohorts of Armagi will settle for nothing less. Not even the mighty US military is strong enough to stop the assault!

Will and Elliott flee back underground, down to the innards of the Earth first mapped in DEEPER and FREEFALL. With the support of a small team that survived the plague of New Germania, they discover a secret at the site of the three core pyramids. A secret that may explain not only where the Styx came from, but the human race, too. Can Elliott, with her mixed blood, unlock the clues before Earth itself spins out of orbit?
All the many threads of the prior TUNNELS books come together in this epic conclusion!

For some reason, I thought the last book, Spirals, was the final book of this saga. New revelations near the end made it clear that the conclusion was at least one book away. I read the entire series with my ears so I will most likely read the concluding volume that way as well. So far, I see no release date for the audiobook. The book is a definite purchase for my school library as the series is quite popular among my students.
Posted by proseandkahn at 1:24 AM