Pi in the Sky by Wendy Mass 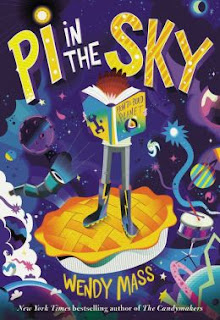 How do I love this book? Let me count the ways:
1. It’s by Wendy Mass. Anything written by her is basically an automatic purchase by me. I have not read everything she has written, but have enjoyed everything I have read. Plus, her books don’t sit on the shelf in my library much. The kids like them and tell their friends to read them. Ms. Mass is a writer who never condescends to her readers. Her characters are fully fleshed, flawed individuals whom the reader tends to come to love. Each one of her books is unique – even the series books.

2. It has an endearing narrator named Joss, who is supposed to be around twelve, but, since time is relative in the Realms and the inhabitants are immortal, he has been stuck in his tween years for… um, a long time. His opening lines are, “If you think it’s tough being the Supreme Overlord of the Universe, try being his son.
Or, more precisely, his seventh son.”

He’s definitely got an identity crisis. Since his older brothers have taken all the cool jobs, Joss is stuck delivering pies. Yes, pies. Pies are the glue that holds the universe together. Besides, as Joss asks, “Who doesn’t like pies?”

3. There are twenty-six chapters in this book and each begins with a quote by a famous scientist/ physicist/ astronomer. The quotes are not only deep and profound in their own right, but relate somehow to the action or theme of the chapter. Totally ingenious. I had heard of most of the scientists and one or two of the quotes, but there are at least three quotes I want to print out as signs and post around my library.

4. There’s real science embedded in an engaging, suspenseful, yet humorous story. Pi in the Sky would make a great read aloud. And why shouldn’t the science teacher do that? (Indeed, when I finished the book, I literally ran over to the fifth grade wing and burst into the science classrooms raving about this book!) If the science teacher can’t/ won’t find the time, (Believe me, mine will because they are that good) the language arts teacher should read it aloud during the space unit. This book can be read on many levels so if your school is all about differentiated instruction, Pi in the Sky is just the ticket. Not only is it deep, deep, deep thematically, with lots of Big Ideas to wrestle with, but also it’s got action and humor that less adept, nay, all readers will appreciate.

5. The Realms may be a figment of Ms. Mass’ imagination but it’s vividly real and totally possible to the reader. And even though Joss can grow wheels instead of legs when he needs to get someplace quickly, he’s very human in his capacity to love as well as worrying about his insecurities. I must say I got verklempt near the end when I realized certain inevitabilities.

So this is my new favorite book for 2013. I favorited two others on Goodreads so far, but gave them four stars. I save the five star assignations for truly outstanding books. Pi in the Sky is out of this world.

Attention faithful blog readers! When I sent an email containing my love for this book to Victoria Stapleton, Queen, Director of School and Library Marketing, she responded with an email for folks interested in reading Pi in the Sky. If you have a real address, no post office boxes, send an email to LBYRBookBuzz@hbgusa.com, and you, too, might share in the wonder of the Realms and the universe.
Posted by proseandkahn at 7:22 PM