I pulled this one from deep within TOM, my tbr mountain.

It's not enough that twelve-year-old Oliver Watson, is secretly a billionaire. The overweight tween from Omaha, Nebraska has been happily hiding behind the persona of the village idiot  while running his global empire. Happily, until the day a classmate nominates him to run for class president as a joke. He turns down the nomination, but when he learns at dinner that night that his "daddy" was class president, he wants a do-over.

Oliver has had daddy issues since he was a day old (he remembers being born) and overheard his father express disappointment over him already. "It's interesting, on your second day of existence, to realize that your father is going to blame all the future failures of his life on you. Not an experience I recommend." (p. 62)

So he brings all his many resources, from bodyguards to his secret lair deep beneath the school, to first convincing the principal to allow him to run, and then running his campaign, which is fraught with a variety of hilarious snafus.

The cover blurb, which is clearly aimed at adults purchasing the book for their tween offspring, declares, "If War and Peace had a baby with The Breakfast Club and then left the baby to be raised by wolves..."-Jon Stewart. Hm-m, I've been around middle school children for 15 years, more than a few of whom were incredibly smart, and I don't think any would get those cultural references. This led me to wonder why on Earth would Stewart be blurbing a book for children?

Ah, a quick peek at the back flap reveals the answer. Okay. That explains it. The blurb mildly annoyed me throughout the reading of the book and continues to do so 11 days after finishing the book. Nothing against the hilarious Stewart per se, or the brilliantly snarky humor of the story, I kept wondering whom the audience was, especially as the humor became increasingly, uncomfortably cynical. I'm all for layering in humor aimed at adults in children's books, but a balance must be struck.

When I booktalk this in Reader's Advisory, I will tell my students, "Think Stewie as a twelve-year-old." That's the voice I read the book with. And, that's the pitch made in the overview online, "Family Guy meets Election...". That's a blurb that kids will relate to although I still wonder if they will hang in and, if they will be as disappointed in the ending as I was.

Some final thoughts: I noted some cover changes when I searched online to see if the book was still in print. It's no longer available new, but is available as a paperback, sporting a new-ish look. 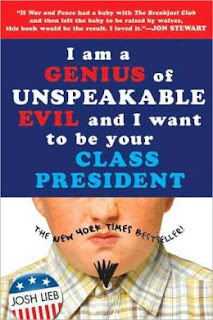 Then, I noticed it was available as an audiobook. Am I intrigued enough to plunk down $18 to listen? But, wait. I do a double take at the cover on this page. Has Oliver been slimmed down a bit? Seems to me he has. I hadn't noticed it as much in the ppb edition because of the addition of the graffiti, but he's slightly slimmer in that one as well. 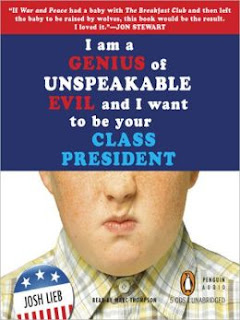 Posted by proseandkahn at 3:11 PM